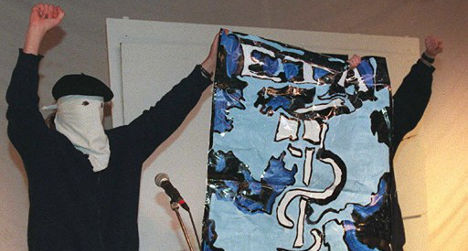 ETA is blamed for the deaths of 829 people in a four-decade campaign of shootings and bombings in Spain and France. File Photo: Daniel Velez/AFP

Three days of hearings into charges that the two tipped off ETA members over impending raids on its extortion rackets in 2006 kicked off in Spain's highest court, the National Audience in Madrid.

The judge heard testimony from the suspects, Enrique Pamies, former police chief for the Basque Country region of Spain, and Jose Maria Ballesteros, a former inspector in the anti-terrorist brigade.

The two deny contacting ETA members to warn them of a police raid planned for May 4, 2006, on a bar in Irun, near the French border.

The bar, run by alleged ETA member Joseba Elosua, was suspected to be handling money gained by ETA by extorting Basque businesses, according to court documents.

Pamies called Ballesteros and told him to go to Irun "allegedly so that he could contact Elosua and give him information about the operation that was under way, in order to prevent it", the court papers said.

The tip-off is thought to have warned off other ETA members from turning up the following day when they were to be arrested.

In Monday's hearing, parts of which were broadcast, Pamies denied ever talking to Elosua and rejected allegations that politicians had ordered the sabotage of the operation.

The raid had been due to take place just weeks after ETA announced a ceasefire under the then Socialist government.

Ballesteros denied allegations that he had given a mobile telephone to Elosua so that he could contact Pamies.

ETA is blamed for the deaths of 829 people in a four-decade campaign of shootings and bombings for an independent homeland in northern Spain and southern France.

Many of its leaders have been arrested over recent years.

In October 2011 it declared a "definitive end to armed activity" but it has not formally disarmed nor disbanded as the Spanish and French governments demand.