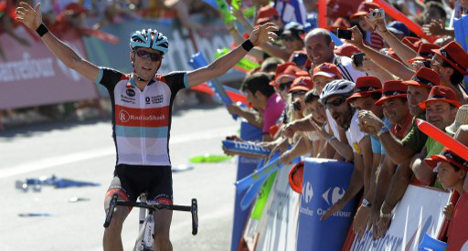 At 41 years old the American became the oldest ever winner of a grand tour on Sunday when he sealed victory in the procession around Madrid in the 21st and final stage of the tour. Photo:Miguel Riopa

At 41 years old the American became the oldest ever winner of a grand tour on Sunday when he sealed victory in the procession around Madrid in the 21st and final stage of the tour.

The Spanish authorities had been asked to carry out the test on behalf of the United States Anti-Doping Agency (USADA).

According to a source for the Spanish Agency for the Protection of Health in Sport (AEPSAD) the testers "travelled to the hotel where the RadioShack team were staying" but Horner could not be found.

However, RadioShack confirmed that Horner was instead staying at a different hotel with his wife on Sunday and had communicated his location, phone number and one-hour time window to be tested to the USADA.

"Chris Horner updated his whereabouts with USADA before the start of the final stage, giving the agency the name of his hotel for the night, phone number and room number for his one hour window between six and seven a.m. This is all according to the rules and Chris Horner received a confirmation email," they said in a statement accompanied with a copy of the said email Horner sent to the USADA.

During the tour doping tests are the sole responsibility of the International Cycling Union (UCI). Thereafter it is up to national authorities to carry out tests on their athletes.

AEPSAD confirmed that having not found the cyclist at the designated hour requested by the USADA, it is the USADA that has the authority to open any disciplinary process should it see fit and that the US authorities will have to make another request to their Spanish counterparts should they wish a further test to be carried out.