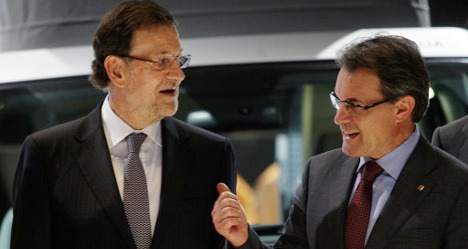 Spanish Prime Minister Mariano Rajoy with the President of the Catalonia Artur Mas in May. Photo: Quique Garcia/AFP

Rajoy told the head of Catalonia's regional government, Artur Mas, that "the ties that bind us cannot be undone without huge economic, political and social costs" in a letter released on Saturday.

"And, of course, I also want to pass on my government's strong conviction that we need to work together to strengthen these ties and move away from confrontation," he added.

The letter was released just three days after hundreds of thousands of Catalans massed in a vast human chain stretching hundreds of kilometres along the Mediterranean coast to demand independence from Spain on Catalonia's national day.

It was a reply to a letter sent by Mas to Rajoy in July requesting the "consultation of the Catalan people, as soon as possible" on its political future.

Mas, who avoids using the word "independence", wants a referendum next year but has said that if Spain blocks that, the next regional election in 2016 could serve as a plebiscite on self-determination instead.

The government of Catalonia welcomed Rajoy's offer for dialogue but said Mas was hoping for a "reply in the style of (David) Cameron" in a reference to Britain's decision to allow a referendum on Scottish independence to take place next year.

"We will take this commitment and will explore it but we will not be naive nor will we accept that as a consequence of talks this process undergo unnecessary delays," the spokesman for the government of Catalonia, Francesc Homs, said on Sunday.

"The calendar for the consultation remains unchanged and there is room for dialogue," he told reporters in Barcelona.

Rajoy's government has insisted that a referendum in Catalonia, which is home to around 7.5 million people, on a break from Spain would be unacceptable on constitutional grounds.

Rajoy's letter did not spell out what issues should be part of talks. Mas has sought a new agreement on tax redistribution which would allow Catalonia to keep more of the money its residents and firms pay in taxes.

One in two Catalans, 49 percent, back independence while 36 percent are opposed, according to a poll published in daily newspaper El Pais earlier this month.