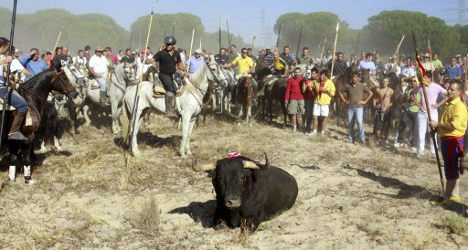 The animals went missing on Saturday night hours before they were due to take part in the notorious Toro de la Vega festival.

Organizers have not ruled out the possibility that animal rights protesters freed the bulls from their stables in the Castile and Leon municipality, online daily El Norte de Castilla reported.

The medieval festival has attracted widespread condemnation for its "savagery and brutality", with anti-bullfighting party PACMA labelling it one of the "worst examples of animal abuse" in Spain.

Toro de la Vega sees hundreds of spear-wielding participants taking on a 600-kilo beast through the streets and fields of Tordesillas.

The bull, which is surrounded by a multitude of people on foot and on horseback, is only pardoned if it makes it past the fighting zone limits standing.

Ten to fifteen thousand people took to the streets of Madrid on Saturday to call for an end to the ancient bullfighting tradition.

"The PP authorize this festivity in Castile and Leon and opposition party PSOE organize it," Duarte told digital daily 20minutos.

"They're both equally responsible for what’s happening in Tordesillas but they won't change anything unless it's in their own interests."

An online campaign launched by Spain's Animal Dignity Platform has seen thousands of participants holding up signs with the message "I'll take the bull's place" as well them posting images of them symbolically breaking spears in half.