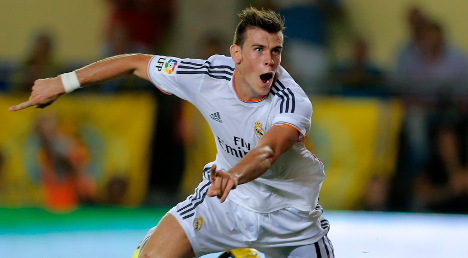 Bale levelled for Real with a simple finish from close range just before half-time to cancel out Cani's opener for the hosts.

The 24-year-old was withdrawn by Ancelotti along with fellow debutant Asier Illarramendi on the hour mark due to their lack of match fitness.

Cristiano Ronaldo then briefly put Real ahead before Giovani Dos Santos, like Bale a former Tottenham player, struck 21 minutes from time to ensure the spoils were shared.

Ancelotti was happy with the contribution of his new players against a confident Villarreal side.

"I think they did well. I didn't want to run the risk of playing them for 90 minutes because it is not good for them in their first game for a while," he said.

"I think Bale is happy because he has scored for the first time with Real Madrid which is very important for him. It was a difficult game for all of us but he played well and showed a good attitude."

As Ancelotti had indicated in his pre-match press conference, Bale lined up on the right side of the attack with Ronaldo featuring mainly down the left.

However, the two did exchange positions at time and Ancelotti expects that is something they will be able to do to even greater effect with more playing time together.

"It was the first time that they have played together. Now and again they are going to change positions because the movement that they have, but it wasn't a specific point we had instructed them to do."

"It is great news that he has scored on his debut," he told Canal Plus. "It was his first game with his teammates and he has only had three days with them, but he is a player with enormous potential."

The real star of the show for Madrid though was goalkeeper Diego Lopez as he responded to calls by some for Iker Casillas to be reinstated as number one with a string of fine stops to save his side slipping to their first defeat of the campaign.

However, Ancelotti said he would stick by his decision to start Casillas for the first time this season when Real open their Champions League campaign against Galatasaray on Tuesday.

"I don't know if he saved us because with more attention to detail in midfield we could have won the match. The decision for Tuesday has already been taken. The two keepers know it and there will be no problem."