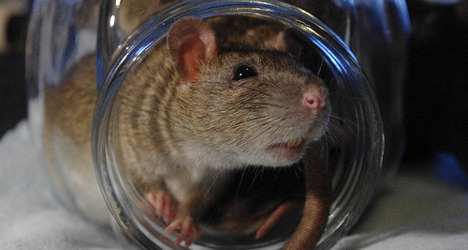 Roberto Villar delivered the rodent to the town hall of La Manjoya in Spain's Asturias region in March to protest against a rat plague at a farm near his house.

The dead animal was presented — in a plastic bag — to the local official in change of hygiene.

"I did it so they would pay attention to me, and in the sense it worked because they cleaned up the farm," Villar told local daily La Nueva España.

"Now the rat  has cost me dearly," said the man, referring to the heavy fine he received for his protest.

According to the town hall, Villar broke local hygiene by-laws with his gift of what they described as "a rat of important dimensions, some "25 to 30 centimetres long".

Now Villar will have to cough up €900 plus an extra €30 for costs relating to the removal of the rat.

But Villar is without remorse.

"I would do it all over again," he told La Nueva España.

He also has no plans to pay the fine, saying he doesn't have "that much money".

"I don't have to pay. If I worked for Bárcenas I would have some extra cash no problem, but that's not the case," said Villar in reference to the disgraced former treasurer of Spain's ruling Popular Party.

Bárcenas claims to have made under-the-table payments to top party figures including current Spanish Prime Minister Mariano Rajoy during his time in office.