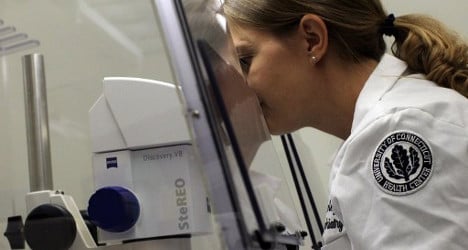 Right now, the technique is at its earliest stage and is hedged with safety questions, which makes it impossible to envisage in humans.

But, said the researchers, it opens up a new strategy leading to a beguiling end: that one day damaged tissue will be healed by simply reprogramming nearby adult cells into replacements for the lost or diseased area. A transplant would not be needed.

They are immature cells that differentiate into the specialized cells that comprise and maintain the human body.

In 2006, a team led by Shinya Yamanaka in Japan announced a breakthrough.

A clutch of four genes introduced into adult cells in a lab dish rewound these cells back to their baby state.

These so-called induced pluripotent stem cells — known by their acronym of iPS — have since become the most closely-followed innovation in the field.

Despite many hurdles, they are seen by some as being even more promising than embryonic stem cells, the "gold standard" for versatility but a source hotly opposed by moral conservatives.

Reporting in the journal Nature, a team led by Manuel Serrano and Maria Abad of the Spanish National Cancer Research Centre created genetically-modified mice that carried the four "Yamanaka genes".

The genes were then switched on by administering a drug in the mice's water.

Cells in the rodents' kidney, stomach, intestine and pancreas all showed signs of being reprogrammed, back to an extremely versatile or "totipotent" state that seemed more like embryonic stem cells than lab-dish iPS, the team reported.

The technique confirms that reprogramming can be done in living tissue, and not just in the lab dish, said Serrano.

"We can now start to think about methods for inducing regeneration locally and in a transitory manner for a particular damaged area," he said.

Other researchers were divided as to whether the work was a game-changer and all cautioned that daunting obstacles lay ahead.

There was no evidence about what happened to the cells in the mice after they had been reprogrammed.

In addition, the animals developed clusters of tumours called teratomas, although this had been quite expected as part of the research. Creating teratomas is a benchmark of the versatility of an experimental stem cell.

"This paper is very exciting. Clearly, nobody wishes to do this for therapeutic purposes because this leads to the formation of tumours," Ilaria Bellantuono, a University of Sheffield researcher, told the Science Media Centre, a not-for-profit organisation in London.

"However, this is a proof of concept that pluripotency can be achieved in vivo," or in living animals.

The process "still needs these iPS cells to be safely converted to useful 'adult' cells in the body," warned Chris Mason, a professor of regenerative medicine at University College London.

"The major challenge will be tightly controlling every step in this potential approach in order to deliver clinical benefits whilst avoiding significant complications."