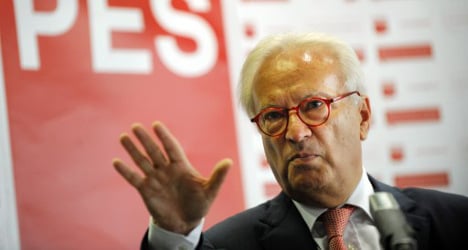 "Do you know how many jobs were created in the last month (in Spain)? Thirty-one," said veteran MEP Hannes Swoboda, a spokesperson for the European Parliament's Progressive Alliance of Socialists and Democrats group.

"This is recovery? This is a scandal," Swoboda was saying by Spain's Huffington Post.

In the speech, Barroso noted that exports of goods and services now made up 33 percent of the country's gross domestic product (GDP) and said Spain's situation was "a signal of the very important reforms and increased competitiveness".

But Swoboda preferred to focus on the growing number of children in Spain who "go to school to eat" because there was nothing at home.

"I don't know if we are a having a problems with simultaneous translation," responded Jaime Mayor Oreja, the head of the Spain's ruling Popular Party (PP) in the European Parliament.

"You said it was a scandal that 31 jobs were created in the last month. The question is: what is your concept of scandal?

"(Is it) when you create jobs or the rule of socialist governments who destroyed millions of jobs in Spain?"

Swoboda then replied that Spain was indeed cutting unemployment — by making people leave the country.

"We can't solve the unemployment problem by telling young people to leave the country and seek work elsewhere," he said.