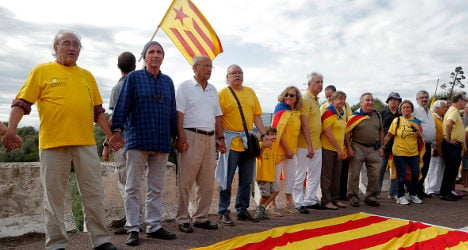 Many people in Catalonia, feeling slighted and short-changed by the central government that redistributes their taxes, want the right to vote on their political future next year.

Now the latest show of support — a human chain that stretched hundreds of kilometres along the northeastern region's Mediterranean coast on Wednesday — looks likely to drive the process forward.

The rally raised pressure for talks between the regional president Artur Mas, who favours a referendum, and Spain's conservative Prime Minister Mariano Rajoy who fiercely opposes it.

"The pressure from yesterday's demonstration is a tremendous challenge not only for the Catalan government but also for Mariano Rajoy's," said the leading centre-left newspaper El Pais.

Conservative Catalan daily La Vanguardia said their governments "must look for ways to respond to that challenge through dialogue, with their sights set high."

Mas, who supports the referendum drive but avoids using the word "independence", confirmed on Wednesday that he had held covert talks on the issue with Rajoy in August.

"Mas and Rajoy are aware, because they made it clear by holding that secret meeting, that they have to move forward. The interesting thing will be to see what they do next," said Joaquin Molins, a political scientist at Barcelona Autonomous University.

After a massive pro-independence demonstration a year ago, Rajoy rejected Mas's demand for him to give Catalonia greater freedom to tax and spend.

That failed to quell a wave of pro-independence feeling driven by Spain's recession, and Catalonia's grudge has festered.

"The passage of time has consolidated the pro-independence movement," Molins said.

"Therefore Rajoy has to make a move and consider negotiations, which I think will be focused on the financial issue."

Mas wants a referendum in 2014, but has said that if Spain blocks that, the next regional election in 2016 could serve as a plebiscite on self-determination instead.

The grassroots movement that called Wednesday's rally, the Catalan National Assembly (ANC), demanded one be held next year, however.

"The human chain successfully showed how the longing for independence of hundreds of thousands of citizens and the ANC is warning the president (Mas) that they are not ready to wait until 2016 for the consultation," said the left-leaning Catalan daily El Periodico.

"Mariano Rajoy cannot just say, as he did a year ago, that there is 'a mess' in Catalonia," it said.

"Nor can he again apply his usual prescription of waiting until the storm blows over."

Given the sensitivity of the prospect of a break-up of Spain at a time when Rajoy is trying to steer it out of a financial and economic crisis, his talks with Mas were hushed up.

But media and analysts said on Thursday they must now face the issue openly, as the protesters' position has hardened.

"Last year they were asking for the right to decide. Now they are clearly demanding independence," said Political Scientist Jordi Matas of Barcelona University.

"The government must offer a political solution."

Rajoy's government has insisted that a referendum in Catalonia on a break from Spain would be unacceptable on constitutional grounds.

Analysts said the latest rally had changed the game, however.

"Madrid up to now has adopted the wrong strategies: pretending nothing is wrong and sheltering behind constitutional rules to impose a status quo that cannot hold," said Matas.

"They will have to find some middle ground and that means holding negotiations."

He said the issue of tax redistribution — a common complaint of Catalans that has been sharped by the recession — has been swallowed up by an all-out drive for independence.

"So many political mistakes have been made, and so few politicians thought that things would get to this stage, that things were allowed to go rotten," said Matas.