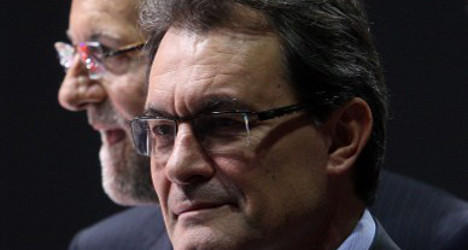 The President of the Generalitat begins by drawing a comparison between 2012’s 1.5 million people march for independence and the Catalan human chain with the same objective planned for exactly a year afterwards.

Mas continues by describing how an "identifiable Catalan culture developed in the Middle Ages and strengthened through time".

His piece then moves on to what he labels as “the subsequent repeated suppression of our government, schools, languages and values”, stretching back from the War of Spanish succession in 1714 to the years of dictatorship under Franco.

Mas's focus then turns to Catalonia’s fight for greater autonomy since the arrival of democracy in Spain in 1978.

The Catalan leader recognizes the increase in self-governing powers and the lift of the language ban, but still highlights that "the advances haven’t met Catalan expectations".

He speaks of how the Spanish government "removed key elements" from the 2005 Statute of Autonomy which, although they approved the following year, they then further "revoked and rewrote crucial sections” in what the Catalan president refers to as "procedurally dubious".

The issue of the lack of fiscal concessions and the "unjust" distribution of public expenditure between Catalonia and the rest of Spain also makes it into Mas's piece.

He also tells of how Catalonia "would have the eighth largest economy in the EU" if they were independent and that calls for a referendum are just as legitimate as those held between Quebec and Canada and Scotland and Britain.

"We don’t seek to isolate ourselves," Mas states.

"We want to be Spain’s brother, as equal partners."

"The best way to solve any problem is to remove its cause," Catalonia’s president rounds off.

"We seek the freedom to vote."