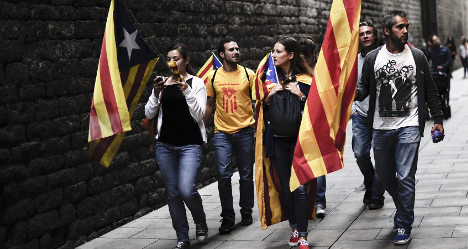 "There is always a special atmosphere in this village on the Diada," Catalonia's national day, said Teresa Forn, in Arenys de Munt, a few miles from the Mediterranean shore.

"But this year it is more special than ever."

She was doing a roaring trade at her souvenir stall in the main street of the town, a pro-independence stronghold.

Catalans of all ages flocked to the demonstration, buying her t-shirts and pro-independence flags — yellow and red stripes intersecting a white star on a blue background.

On a nearby square, under rainy skies, a band with pipes and drums played "sardanas" — traditional Catalan folk tunes.

Perched in hills overlooking the Mediterranean on Spain's northeastern coast, Arenys de Munt was the first of hundreds of towns that held non-binding votes on Catalan sovereignty in 2009.

On Wednesday townsfolk planned to head down the hill to the neighbouring seaside village of Arenys de Mar to link arms in their section of a "human chain".

The chain, named the Catalan Way, was due to link 86 towns and villages over 400 kilometres (250 miles) along the coast to push for a referendum on political self-determination for Catalonia in 2014.

The protest aims to generate international media coverage of the referendum drive, which is staunchly resisted by Spain's central government.

"I hope that people outside will listen to us, because there is no chance of that in Madrid," said Montserrat Sal, a demonstrator in her 70s, knitting in the street with a group of other women.

At Forn's stall, a woman bought a flag bearing the slogan "We are a nation" for her son, who wrapped it proudly around his neck.

"Everyone here owns an independence flag, but they buy new ones as replacements," said Forn, 53.

Nearby, Albert Sole and his two children strolled along dressed in the yellow shirts distributed by organizers of the Catalan Way.

"I didn't use to be for independence. I have become radicalized over time," said Sole, 46, a teacher.

"I have always felt Catalan but now it has got to the point where the economic suffocation is so great that pro-independence feelings are aggravated."

He and his family planned to go along with various uncles, aunts and grandparents to their section of the chain, where they must be in position at 5.14 pm (1514 GMT).

The timing is a reference to the year 1714, the date of a military defeat which for many Catalonian nationalists marked the beginning of three centuries of oppression by the Spanish state.

Pro-independence feelings have been fanned in recent years as the region, considered a key driver of Spain's economy, has suffered in the country's recession, with the unemployment rate rising close to 24 percent.

Across Catalonia, like-minded demonstrators braved the cold drizzle to join the protest on Wednesday.

Flags flew from cars and coaches along the highway and horns sounded as people travelled to join the chain at various points.

In Barcelona, the region's capital, 54-year-old community worker Merce Juan Rodriguez was setting off in the morning on the 160-kilometre drive south to bolster the chain in El Perello, a less densely populated area.

Her husband is originally from the distant northwestern region of Galicia and her two cousins from Cadiz in the south, but as adoptive Catalonia residents, they too are joining in.

"It is not a question of blood, it is a question of culture. They don't respect us," said Rodriguez, echoing a common Catalan complaint about the rest of Spain.

She wore a yellow t-shirt and held a banner bearing the slogan "One metre closer to freedom", in Catalan and English.

In the centre of Barcelona, Joan Sabate admired the multitude of red and yellow flags hanging from balconies over the street.

"It was about time we did something like this," he said.

"I am 81 years old and I never thought I'd see independence in my lifetime, but now I am hopeful and I think I will."

He walked off humming the Catalan national anthem.