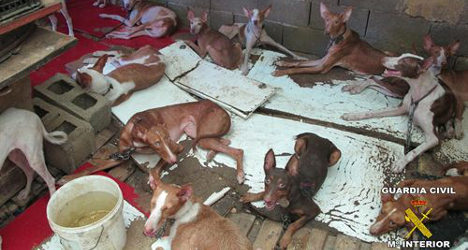 The dogs were tied up on very short leashes in an area without ventilation. Photo: Guardia Civil

The 64-year-old will face animal cruelty charges after the dogs were found tied up with ropes or chains just 30 centimetres (11 inches) long.

They were being housed in terrible conditions, without ventilation and in high temperatures and humidity.

Most were suffering illnesses resulting from abuse and lack of care, and some were seriously unwell, a veterinary report concluded.

The man should face "48 counts of animal abuse and not one", sources from one of the shelters that took the dogs in after the abuse was discovered told Spanish daily 20 minutos.