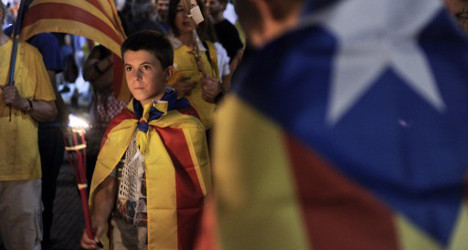 People in "Estelada" Catalan flags during a rally in favour of independence from Spain, in Barcelona on Tuesday, the eve of the National Day of Catalonia. Photo: Josep Lago/AFP

The chain will stretch across 86 cities, towns and villages along the coast of the northeastern region on the Mediterranean, passing landmarks such as the Sagrada Familia basilica in Barcelona and the city's Camp Nou football stadium, home to Barça.

The event, tagged the "Catalonian Way Towards Independence", will coincide with the region's national day, or Diada, which recalls the final defeat of local troops by Spanish king Philip V's forces in 1714.

"It's going to be a historic day," said Carme Forcadell, the president of the Catalonian National Assembly, the grassroots group organizing the human chain. She predicted over 400,000 people will take part.

Participants will link arms at 5.14pm (15.14 GMT), a reference to the year 1714, which for many Catalonian nationalists marks the beginning of three centuries of oppression by the Spanish state.

The protest is an attempt to emulate the 1989 Baltic Way chain that called for the independence of Estonia, Latvia and Lithuania during the breakup of the Soviet Union.

Hundreds of thousands of people joined in a huge national day rally in Barcelona last year as Catalonian separatist stirrings were stoked by the cuts to health and education services.

The push for independence faces a major roadblock in the form of the Spanish government.

Prime Minister Mariano Rajoy's right-leaning government refuses to countenance a breakup of Spain, and has vowed to block a referendum on self-rule that Catalonian regional president Artur Mas has promised for 2014.

In a sign of its determination, Madrid called on the Constitutional Court to strike down the region's latest attempt to assert itself: a parliamentary declaration of sovereignty in January.

The court agreed to hear the case, meaning the declaration is suspended until it makes a ruling.

A referendum would be a "unilateral declaration of independence that would have serious consequences for Spain and also for Catalonia" which would have to "bid farewell to the European Union", Spanish Foreign Minister Jose Manuel Garcia-Margallo said Tuesday.

On Tuesday evening, however, Mas hit back. Catalonians "must be consulted next year on their political future," he insisted.

He would use all the "legal and democratic means" at his disposal to press their case for Catalonians to vote on their future, he added.

The road map was clear, he added. "The right to self-determination, a referendum, national transition and the formation of a state," should be done "democratically … peacefully and with broad majorities".

As always, he took care to avoid the word "independence".

The Catalonian government wants Spain to follow the example of Britain, which has allowed a referendum on Scottish independence to take place next year.

Proud of their distinct Catalan language and culture, which was repressed under the Francisco Franco dictatorship, yet suffering in Spain's recession, many of the 7.5 million people in debt-laden Catalonia resent seeing their taxes redistributed to other parts of Spain.

The Catalonian regional government argues that it receives considerably less per capita public expenditure than the average for all Spanish regions, while contributing much more to the Spanish treasury than most regions.

The region had to go cap-in-hand to Madrid in January to ask for €9.07 billion from a fund to help debt-laden jurisdictions.

About 5,000 volunteers will help run the protest. Some 1,500 buses will help move protesters into position.

Mas, while he supports the protest, will not join in himself, out of respect for his role as political leader of all people in Catalonia, including those who want to remain part of Spain.

Rajoy signalled that Madrid would be willing to revise Catalonia's fiscal relationship with the central government during a meeting with Mas held at the end of August, according to Spanish media reports.

One in two Catalans, 49 percent, back independence while 36 percent are opposed, according to a Metroscopia poll published Sunday in centre-left daily newspaper El País.