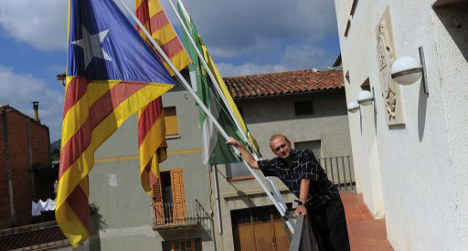 Nestled in the valleys of central Catalonia, the town of Sant Pere de Torello symbolically declared itself a "free Catalan territory" on September 3rd, 2012, the first of dozens of towns and villages to do so across the region.

The town hall has declared Spain’s national day October 12th a normal working day; it pays its taxes to the regional Catalan government instead of Madrid as a form of protest; and from the balcony it flies the Catalan independence flag instead of Spain’s.

"We have fewer and fewer Spanish symbols in the town and we are mobilizing people for the Catalan independence fight," said the town’s mayor, Jordi Fabrega, a councillor for the secessionist Republican Left of Catalonia party, standing in front of the town hall’s flag with a proud smile.

The town of 2,500 people will send more than 200 protesters in four coaches to join the human chain on September 11, Catalonia's national day, or Diada, which recalls the final defeat of Catalan troops by Spanish king Philip V’s forces in 1714.

Organisers aim to join 400,000 people along the entire coastline of the northeastern region of Catalonia to demand a historic redrawing of the map of Spain.

Although the event is tagged the “The Catalan Way Towards Independence,” the route faces a major roadblock, however, in the form of the Spanish government, which refuses to countenance a breakup.

Catalan president Artur Mas has vowed to hold a referendum on self-rule next year but it is unclear how he could fulfil the promise in the face of opposition by Madrid, which insists the poll would flout the constitution.

"Being a free territory is fantastic. Here, we all want to be independent," said Narcis Arxe, in his 70s, sitting on a bench beneath a tree by a residence for the elderly, which was decorated with a large Catalan flag.

"This district is a cradle of the independence cause and we were the first to make a declaration of independence," said 88-year-old retired tax driver Ramon Folgona, wearing a pro-independence pin on his shirt.

With other elderly residents, the pair discuss the surge in independence stirrings since hundreds of thousands of people rallied in Barcelona calling for a break from the rest of Spain on Catalonia’s national day last year.

Neither an economic crisis in Catalonia nor Madrid’s steadfast opposition seem to have tamed the pro-independence fervour.

Catalan independence flags of all sizes fly from the balconies of the town. Secessionist stickers can be seen in shop windows. Spanish words are scratched out on signs.

In the town's main bar, locals play dominoes to listen to the latest news about preparations for the human chain protest.

“We are eight brothers and all of us are going except for one that can’t make it,” said insurance office worker Ramon Joventeny.

"I can't go because I have to work but a lot of my relatives are going. It is worth taking part," said Teresa Bru, 55, who runs a grocery store with a shop window decorated with the Catalan flag.

But it would be tough to get Madrid to concede to a new state of Catalonia, she added.

Ferran Requejo, political scientist at Barcelona’s Pompeu Fabra University, said Madrid would dig in with its argument that Catalan independence is barred by the Spanish constitution.

"The Catalans will have to find a way out," he said.

From the mayor’s office, Fabrega says the referendum on self-rule must be held in 2014 one way or the other.

"There is nothing more legal than respecting the will of the people," he argues.

But not every resident agrees.

Andres Jose Gonzalez, one of the few townspeople to speak in Spanish rather than Catalan, disagreed with his mayor’s aspirations.

"Catalonia is a region of Spain. This is stupid. I am 50, and when I die Catalonia won’t be independent," he declared, as another independence flag was hoisted on a nearby building.