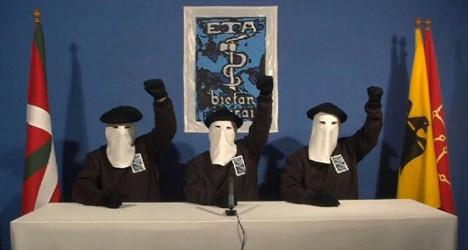 Hundreds of ETA members are in prison in Spain and France, including many of its leaders who have been arrested over recent years. Photo: YouTube

The Spanish and French governments refuse to have any contact with the group, blamed for 829 deaths in its four-decade campaign for an independent homeland, insisting it disarm and disband unconditionally.

But sources close to the group and experts say it may follow up its historic announcement in October 2011 of a "definitive end to armed activity" with a further gesture in the hope of resolution.

"My understanding is that ETA will in the near future make a statement," said Brian Currin, an Irish lawyer in an international contact group, not recognized by Madrid, which supports dialogue on the issue.

"A statement by ETA is expected this autumn," said a source close to the matter in France.

"It is difficult to say whether it will be in September or October," but "significant advances" are expected, the source added.

Hundreds of ETA members are in prison in Spain and France, including many of its leaders who have been arrested over recent years.

"The main demand of Basque society is the disarmament and disbandment of ETA," said Inigo Urkullu, the moderate leader of the nationalist party PNV who was last year elected president of the regional government.

A new party, Sortu, was formally launched this year, born from the ashes of Batasuna, outlawed by the Spanish government, which considered it to be the political wing of ETA.

"ETA is determined to lay down its arms and would like the (Spanish and French) governments to act as witnesses," Sortu's leader Hasier Arraiz told AFP.

"Because we consider that disarmament is something that must be done in an ordered way, and in such a way that it can be guaranteed," like the disarmament of the Irish Republican Army, Arraiz said.

Another source close to the matter on the French side of the border added: "ETA doesn't want to just throw its weapons down in the street."

Currin said the handful of ETA leaders still at large would also have to be taken into account in any resolution, for example by offering them a political role.

"The residue of ETA still there because they have not had decommissioning" of arms, Currin said. "You don't only decommission arms, you decommission people as well."

Madrid's refusal to talk with ETA, which it brands a terrorist group, as do the European Union and the United States, may be holding up steps towards disbandment, he warned.

"I do not expect that ETA will announce a unilateral disarmament because there is nobody to engage with" to discuss reintegrating ETA members into civil life, he added.

The Spanish government says that if ETA does not disband, its members will be hunted down and arrested in time.

"We are going to carry on that way. That is our policy and I hope ETA will grasp that as soon as possible," said Spain's Interior Minister Jorge Fernandez Diaz this month.

ETA is maintaining its demand that its imprisoned members be moved to prisons closer to home.

"The prisoners are one of the keys to this," said one expert on the issue, Gorka Landaburu — a journalist who was injured in an ETA attack in 2001.

The European courts are due to rule on Spanish legal practice that allows prisoners' jails terms to be recalculated and extended.

Under the so-called Parot Doctrine, ETA prisoners faced new restrictions on how remissions for prison work were applied to their sentences, often meaning they faced many more years behind bars.

This would affect 70 ETA convicts, said Maritxu Paulus Pasurco, a lawyer acting for some of them in France.

Landaburu also flagged up a key date looming: October 10 and 11, when the Basque city of San Sebastian hosts a peace conference with delegates from around the world.

It was after a similar conference there on the same date in 2011 that ETA announced an end to violence, he said.