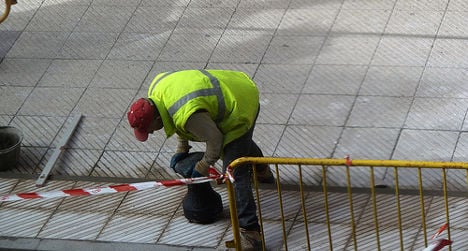 Some 8 percent of Spain's black economy is labour fraud, say the authors of a new study by Spain's La Caixa bank. Photo: gonmi/Flickr

The study by the bank puts the value of the country's submerged economy at 18,6 percent of gross domestic product (GDP).

This is just below the European average of 18.5 percent but well above Germany's figure of 13 percent, and the UK figure of 10 percent.

In addition, some 8 percent of Spain's black economy is labour fraud, the authors of the La Caixa study also say.

That means there around a million 'hidden' jobs in the country.

"Self-employed workers have to pay a lot in comparison with the compensation they receive," Antoní Garrell of the Sabadell Chamber of Commerce told Spain's La Vanguardia newspaper.

Most of Spain's 'autónomos' pay a minimum flat rate of around €250 a month. In exchange, they receive health care and pension entitlements — once they have paid into the system for 15 years.

But Garrell pointed out that while around a million people had stopped paying this fee since the crisis began, they "continue doing some kind of work".

"When they start, they still don't know if their idea is going to work, and very few join the national self-employment scheme," he explained.

"This is though to be only one in ten people."

This view is echoed by Oriol Amot, a professor at Barcelona's Pompeu Fabra University.

In Spain, "fraud is not viewed as negatively as in other countries, in the same way that copying exams isn't (frowned upon)", the professor told the Catalan daily.