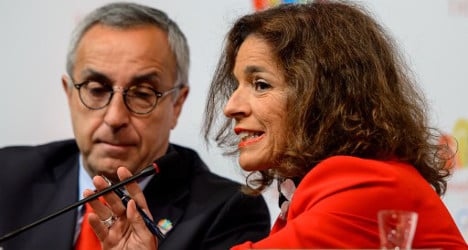 When asked if she thought it was a good decision to host the Olympics in a country with 27 percent unemployment, Ana Botella started giving an answer about Spain’s infrastructure.

That wasn’t all, as the wife of former Spanish Prime Minister José María Aznar also got her percentages wrong, first stating that 90 percent of the Olympic infrastructure was already built and then 80 percent.

Botella, who had decided not to wear the translation headphones while being asked questions in English she didn’t fully understand, then proceeded to put them on when Spanish-speaking journalists addressed her.

Spanish press and social media platforms have been mocking the 59-year-old mayor for her strange decision-making during the Olympic press conference held in the Argentinian capital of Buenos Aires on Thursday.

La Sexta's satirical TV show "El Intermedio" went over Botella's haphazard answers and presenter El Gran Wyoming suggested "Mayor, if you don't understand the answers, I've got the same recommendation I give to those who walk around listening to reggeaton at top volume: 'Why don't you put on some headphones?'

One of the show's other presenters Dani Mateo had already picked up on Botella's lacklustre English in a previous programme.

“Those of you that can’t speak English, read the subtitles, and those of you who can get a whisky with ice because you’re going to need it,” Mateo once said.