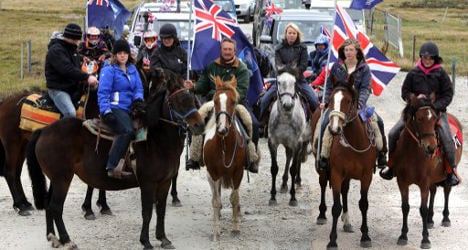 Some 99.8 percent of residents of the Falkland Islands expressed a desire to stay with the UK in a March 2013 referendum on the issue. Photo: Tony Chater/AFP

Spain's Foreign Minister Jose Manuel Garcia-Margallo compared his country's battle to get London to surrender sovereignty over Gibraltar — a small, rocky outpost ruled by Britain for three centuries — with Argentina's demand for control of the Falklands Islands.

"The similarities are enormous," Garcia-Margallo told a news conference in Montevideo, Uruguay adding that both Gibraltar and Falklands were in need of "decolonization".

Argentina is embroiled in an escalating diplomatic row with Britain over the Falkland Islands, the object of a brief, bloody 1982 war which Buenos Aires lost.

Garcia-Margallo added that Argentina "can count on Spain's support" in its effort to regain control of the Falklands, known in the Spanish-speaking world as the Malvinas.

He criticized Britain's position that inhabitants of the disputed territories are entitled to self-determination and have themselves resolved to remain under London's control.

But he added that Spain was ready to discuss the issue with Britain at any time.

Tensions over the Falklands Islands have become particularly intense over the past year, the 30th anniversary of the conflict.

And they have been further intensified by British moves to open waters around the Falklands to oil exploration.

Britain has insisted it will not discuss sovereignty as long as the 3,000 people on the wind-swept islands want to remain under the British flag

Gibraltar is a territory on the southern tip of Spain which measures 6.8 square kilometers (2.6 square miles) and is home to about 30,000 people.

The latest tensions between Madrid and London over the outpost began in July after Gibraltar boats dumped blocks of concrete into the sea near the territory.

Gibraltar said it was creating an artificial reef that would foster fish populations.

Garcia-Margallo recently threatened to impose a €50-euro ($65) fee to enter or leave Gibraltar, vowed tax investigations of thousands of Gibraltarians who own property in Spain, and said Madrid could close its airspace to planes heading to or leaving the airport in the British outpost.

Britain insists it will not discuss sovereignty as long as the 3,000 people on the wind-swept islands want to remain under the British flag.

A March 2013 referendum on the islands a 92 percent turnout with 99.8% of those voters expressing a wish to the stay British.