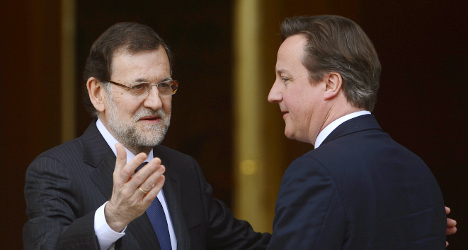 The meeting would be the first face-to-face encounter between the two leaders since the latest row Gibraltar flared up in July.

Such a meeting — being reported as a near certainty by Spanish press — would also come a day after the UK's Europe Minister David Lidington broke ranks to publicly state that the UK–Spain dispute could suffer damage as a result of the latest dispute over Gibraltar.

"There is clearly a risk that this will cloud the bilateral relationship," Lidington told the Financial Times.

"I think it would be a tragedy were that to be put at risk but I think it’s important that no one misunderstands the seriousness of our commitment to Gibraltar and to the democratic right of the people of Gibraltar to remain British."

The current tensions between Spain and the UK arose after boats from the UK-held territory dumped blocks of concrete into the sea near the territory.

Gibraltar said it was creating an artificial reef that would foster fish populations.

But Spain said the reef would block its fishing boats and introduced stringent border checks which it said are needed to stop smuggling, creating long waits for motorists trying to enter the territory.

In a telephone conversation on August 7th with Cameron, Rajoy stressed that the unilateral decision to create the reef was unacceptable.

The Spanish PM said at the time that the UK and Spain were friends and conflicts had be to "managed with honesty," Spain's El País newspaper reported on Friday.

Rajoy also expressed serious environmental concerns and said he was worried about future of the fishing activity in the disputed waters off 'The Rock'.

UK PM David Cameron said he was concerned about the long traffic jams at the Gibraltar border, and stressed the UK's position on the sovereignty of Gibraltar would not change.