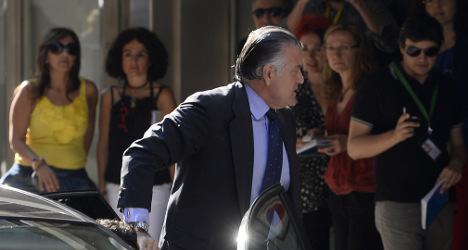 The scandal-hit ex-treasurer of Spain's ruling Popular Party Luis Barcenas is in financial difficulties after his bank accounts were frozen. Photo: Pierre-Phillipe Marcou

Luis Bárcenas, currently being investigated for his role in two separate corruption cases, has asked Spain's High Court Judge Pablo Ruz to help him with his financial problems.

Those investigations have revealed that the former PP treasurer hid as much as €48 million ($63 million) in accounts in Switzerland.

As a result, the disgraced official — currently remanded in custody without bail — has seen his bank accounts blocked.

But now Bárcenas and his wife Rosalía Iglesias  — herself facing charges of money laundering and falsifying documents — have petitioned Ruz to release those funds to the tune of €5,000 a month.

"Because of various judicial decisions, all the bank accounts of our clients are blocked at present," said the couple's lawyers on Friday.

The lawyers said this meant the family would soon be unable to pay its electricity, water and gas bills.

The average salary in Spain is just under €2,000 a month, Spain's stats office the INE said in late June.