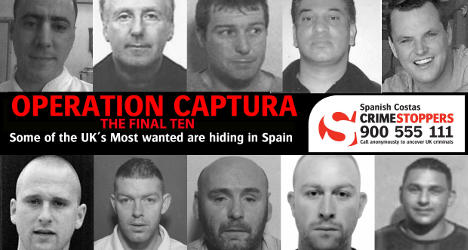 Fifty-three of the 65 individuals highlighted in Operation Captura have been busted since the anti-crime operation was launched in 2006.

Operation Captura, run jointly by  UK crime-fighting charity Crimestoppers and the country's Serious Organised Crime Agency (SOCA), identifies individuals on the run in Spain who are wanted by UK law enforcement agencies for serious crimes committed in the UK.

Fifty-three of the 65 individuals highlighted in the sting have been busted since the operation was launched in 2006.

Many are now doing time for crimes ranging from drug trafficking to sex crimes to murder.

The latest arrest was that of Darren Kevin O’Flaherty. Detained in August, O’Flaherty was wanted over the 2010 murder of Dublin holidaymaker John O’Neill in Spain, among other crimes.

Other recent high profile arrests include that of Mark Lilley, one of Britain’s most wanted fugitives, found hiding in a panic room when officers raided a luxury villa in Malaga on July 6th.

The 50th Operation Captura arrest took place in May when Andrew Moran was arrested in Spain for an aggravated robbery that took place eight years ago.

Now the UK is hoping expats can help track down the remaining ten on the list.

Operation Captura will be targeting areas with a large British expatriate community such as Malaga and Alicante, which are potential hideouts for fugitives on the run.

Roger Critchell, Director of Operations at Crimestoppers, said: “With the arrest of O’Flaherty, we are down to the final ten remaining fugitives left on the run from our Operation Captura campaign. The success of these appeals means that they won’t be out there for long.

"If you call us, no-one will ever know you who you are and you will not go to court. Contact us on 0800 555 111 or through our website www.crimestoppers-uk.org."