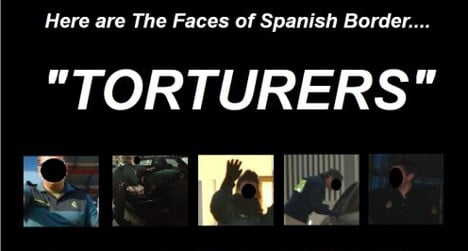 Screenshot of the website set up by Emilio Esteban calling on Gibraltarians to harass border guards outside their homes.

British national Emilio Esteban was detained on Thursday in the Madrid municipality of Tres Cantos by agents of Spain's Civil Guard police force.

He is thought to have set up a website in which he provided the names and addresses of Civil Guards working on the border with Gibraltar and actively encouraged public protests outside their homes, Spanish news agency Europa Press reported on Thursday.

Esteban published pictures of Civil Guard officers who were operating at "la Verja" (the Fence), calling them "criminals" and "torturers".

He set up the website in August after a dispute over territorial waters between Spain and Gibraltar led Civil Guard officers to carry out extensive border control checks which in turn led to hold ups of up to six hours.

The home harassment campaign, popularly known as escraches, involve direct targeting of the people being condemned at their homes or workplaces.

The protest method was popularized by Spain’s anti-eviction lobby (PAH) this year, with demonstrators placing stickers on the doors of ruling Popular Party (PP) politicians or chanting slogans outside their homes and offices.

Spanish police have complained of being pelted with stones and insulted by drivers stuck in queues waiting to leave Gibraltar, which is home to around 30,000 people.

Spanish Interior Minister Jorge Fernandez Diaz blasted the website as "an intolerable attack on security forces and the rule of law".

"This attack violates their privacy and compromises the safety of agents. We are going to fight to defend our security forces to the very end," he added.

But Esteban has denied encouraging violence against Spanish police.

"We called on people to photograph and protest peacefully against the Guardia Civil, not throw stones and insult," he wrote in a Twitter message on August 31st.