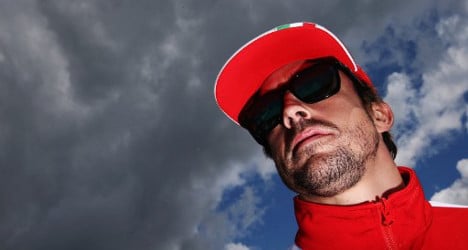 "I've loved cycling since I was young. It's always been part of my training and part of my life." Photo: Roslan Rahman/AFP

"Thanks for showing love, understanding and respect for the legacy of our team."

These were the words with which international cycling team Euskatel showed their gratitude to Fernando Alonso for "avoiding the team’s demise".

Alonso now plans to hand over the reins to the cycling team's managers, and admits there is a lot of work to do.

"We need to find sponsors. It's an ambitious project but we have a lot of hope and dreams," said Alonso at a press conference on Thursday.

"I've loved cycling since I was young. It's always been part of my training and part of my life."

Alonso's generosity and commitment to a sport marred by constant doping scandals has surprised commentators who often saw the Spanish driver as a self-serving character.

In late July, he was ticked off by his bosses at team Ferrari after he slammed the cars he had been given to drive.

His turbulent relationship with former McLaren teammate Lewis Hamilton, who he reputedly viewed as a favoured upstart within the team, has also given him a reputation as somewhat of a spoilsport among some international critics.

But buy-up of team Euskatel by this FI driver who relaxes by practicing card tricks before big races may serve to change those views.

As BBC’s sports commentator Matt Slater said: "Fernando Alonso's love of cycling is well known in F1 but nobody saw this coming."

A 2010 interview with The Guardian’s Donald McRae already gave an insight into the Asturian’s passion for the sport.

"Creating a top team and being in a position to win the Tour de France will give me a nice feeling," he said at the time.

Alonso has been interested in creating a new Tour de France team with his friend cyclist Alberto Contador for some years now.

It's hard to remember a time when Fernando Alonso was not a household name in Spain.

Last August marked the tenth anniversary of his first Formula 1 victory at the tender age of 22.

It made him the first ever Spaniard to win a F1 race and the youngest ever winner at the time.

More importantly, Alonso can claim to be almost entirely responsible for catapulting Formula One to the top of weekend TV viewings.

"It was a hard battle when I started," Alonso told The Guardian’s Donald McRae in 2010.

"When I raced at Minardi in my first year [2001] my family had to watch me on German TV. In Spain there were no TV rights for Formula One."

F1 now occupies as special a place in Telecinco’s Sunday morning schedule as it does in the hearts of Alonso’s devoted fans: the Alonsomaniacs.

As many as 36,500 Alonso devotees crowd into Valencia’s Grand Prix every year in the hope of seeing the Asturian beat off all the foreign opposition.

The driver’s fame in Spain has meant he’s chosen to live abroad for most of his career: Oxford (England) and Lugano (Switzerland) have been his two main residences for the past decade.

In fact, the buzz Alonso generates whenever he returns to Spain has resulted in numerous scuffles with paparazzi.

The two-time Formula One champion was sued back in May after attacking a photographer and breaking his camera for allegedly taking photos of the F1 driver’s new girlfriend, Russian model Dasha Kapustina.

Nonetheless, Alonso decided to move back to his native city of Oviedo in 2011 to be closer to his friends and family.

It was here that the Ferrari driver first got behind a steering wheel at the age of three.

But the move from Switzerland meant the driver had to give up a third of his Ferrari earnings —  €57 million — to the Spanish tax authorities.

"It's great to go home. I'm happy to pay the money," the UK’s Daily Mirror reported him as saying.