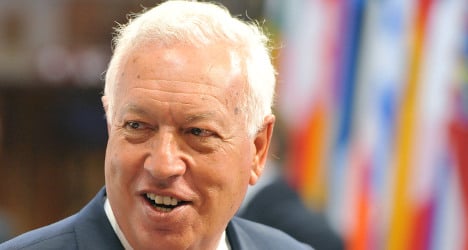 "The danger is not in our actions but in doing nothing," said Spain's Foreign Minister José Manuel García-Margallo on Tuesday. Photo: Georges Gobet/AFP

José Manuel García-Margallo used his appearance in parliament to stand up for the actions taken by Spain in the current row with the UK over Gibraltar.

These actions were in defence of the country's interests in the face of what Spain considered violations by Gibraltar's authorities, García-Margallo said to the country's MPs.

The current tensions over Gibraltar began in July after boats from the territory dumped blocks of concrete into the sea near the territory. Gibraltar said it was creating an artificial reef that would foster fish populations.

Click here to read The Local's article on why Spain wants Gibraltar back.

But Spain said the reef would block its fishing boats and introduced stringent border checks which it said are needed to stop smuggling, creating long waits for motorists trying to enter the territory.

In parliament on Tuesday, Spain's Foreign Minister reiterated that Spain couldn't watch on with arms crossed in the face of the creation of the reef and the growing traffic in contraband tobacco.

"The danger is not in our actions, but in doing nothing," García-Margallo added.

The minister also welcomed the European Union's (EU) decision to send inspectors to monitor the situation at the Spain—Gibraltar border.

He stressed that Spain had accepted the inspectors' presence and that the mission hadn't come at the behest of the UK.

"Legality is the only framework within which Spain is operating," said García-Margallo of the country's decision to take up the row with the UK to the European Courts.

The Foreign Minister highlighted that sovereignty was not the issue in the current dispute. Rather the focus was on compliance with EU laws.

He said he would support any moves towards the creation of ad hoc groups to look at fishing and environmental issues, adding these could include representatives from Spain, the UK, the southern Spanish region of Andalusia and Gibraltar as appropriate.

He told Spanish MPs that friendship with the UK "should prevail".

Also on Tuesday, UK Foreign Secretary William Hague told the UK Commons: "Gibraltar is British and wants to stay British and for us that is the end of the matter and we will never negotiate over sovereignty over the people of Gibraltar's heads as the last Labour government did."

"He reiterated the United Kingdom and Gibraltar’s commitment to ad hoc dialogue and confirmed that we were keen to discuss details of how we can take this forward", said the Foreign Office in a statement.