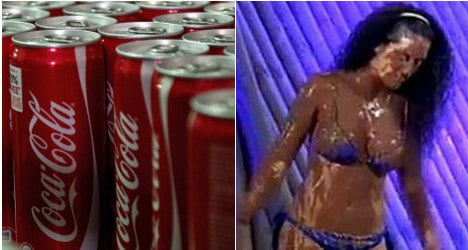 The reality programme that has caused all the furore featured a contestant having to bathe in chocolate as a punishment for not completing a task. Photo: Prakash Singh/AFP/YouTube

"God save us from groups like Los Guardianes de la Fe (Keepers of the Faith), telling us what TV show to watch, what book and newspaper to read, and what party to vote for."

This tweet by Coca Cola Spain president Marcos de Quinto has been at the centre of a heated dispute between a religious group with a reputation for radical views and the world’s biggest drinks brand.

Deemed by some to be a direct attack against Christians, de Quintos has justified his reaction by arguing Coca Cola would not be blackmailed into withdrawing its sponsorship from Spanish reality show Campamento de Verano (Summer Camp).

"If the price I have to pay to make you drink Coke is to think like you, then I'd rather you don't drink it. Seriously, my apologies if not yielding to your claims has upset you. Best regards," de Quintos said in another tweet.

The programme that has caused all the furore featured one of the contestants having to bathe in chocolate as a punishment for not completing a task.

Advertisers like McDonalds, Orange, ING Direct, Burger King and Minute Maid quickly withdrew their sponsorship from the programme as a public awareness campaign was launched by the Keepers of the Faith Christian group on Hazte Oir (Make yourself heard) website.

De Quintos has clarified that his mockery of the campaign wasn't directed at Christianity in general but at the religious group for its radicalism and blackmail tactics.