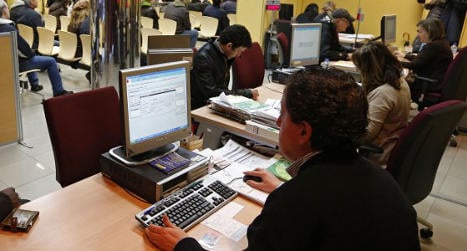 The Spanish government hailed a sixth consecutive month of declines, and the first drop in the month of August since 2000. Photo: Cesar Manso/AFP

The total number of registered unemployed — 4.70 million in raw figures — was basically unchanged, according to the Employment Ministry report.

But the decline of 31 people from the previous month was enough for the Spanish government to hail a sixth consecutive month of declines, and the first drop in the month of August since 2000.

When the figures were corrected to smooth out seasonal variations, the number of claimants fell by a more substantial 13,700 people to 4.87 million.

The government and financial markets usually focus on the raw figures rather than the seasonally adjusted data.

Spain's state secretary for employment, Engracia Hidalgo, said the figures were coherent with other positive economic indicators such as improving sentiment and competitiveness "together with an increase in the credibility of our economy".

"I believe we have touched bottom," said de Guindos.

The economy has been shrinking for two years and official data show the unemployment rate hit 26.26 percent in the second quarter of this year, slightly below the record 27.16 percent posted in the first quarter.

Employment Ministry figures, like those released today, are based on the number of unemployed persons registered in their offices.

Spain's stats office, the INE, however, conducts a survey (the EPA) of 65,000 Spanish households to obtain its results.