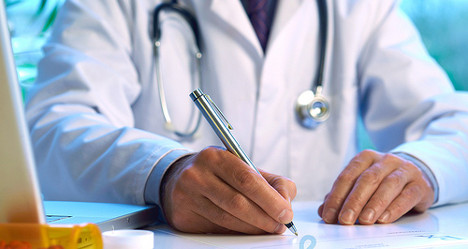 David Cámara is planning legal action against a doctor he claims told him homosexuality was a mental disorder. File photo: Life Mental Health/Flickr

The openly gay Cámara put this down to a “run of bad luck” over two years which had affected his mental state.

But the young chef alleges the doctor then advised him to undergo a battery of tests "because gay couples are prone to all sorts of illnesses".

The doctor told me "I had to understand I was unnatural," Cámara told Spanish newspaper El Diario.

Cámara also says the doctor told him his problems were in his head and that "homosexuality is a mental disorder that can be treated".

Allegedly the doctor blamed all of Cámara’s physical symptoms on this 'disorder'.

"Haven’t you realized that you are too masculine to get it into your head that you are gay?" the doctor is also alleged to have asked the young man.

At that point, Cámara says he told the female doctor she "wasn't professional enough".

He said the woman was offended and recommended that he see another doctor, but that she was also reticent to refer him on when he tried to take her up on her offer.

Cámara now plans to take legal action against the medical centre in question.

In a statement, those authorities said that the doctor in question had never "treated homosexuality as an illness" and that Cámara had undergone an array of suitable tests based on the symptoms he reported.

They also defended the doctor, saying she had followed standard procedures in the consultation and that she had been "respectful" in all of her dealings with Cámara.

Health authorities have also denied the doctor viewed homosexuality as an illness.

Andalusia's Arco Iris Federation, a gay support group, has asked authorities to investigate the issue while the FELGTB, Spain’s chief organization for the rights of lesbians, gays, transsexuals and bisexuals has offered legal support.