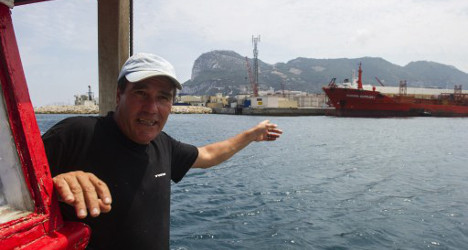 A Spanish fisherman, points to where Gibraltar recently dropped concrete blocks in the bay of Algeciras. Spanish fishermen say their catch has been ruined by the blocks. Photo: Marcos Moreno/AFP

Sixty-two percent of Spaniards rate the measures being taken by Spain against Gibraltar as either "very good" or "good", a new poll by Spain's Real Instituto Elcano shows.

But just over a quarter of Spaniards say Madrid's actions are "bad", while 10.8 percent rank these as "very bad".

Meanwhile, 75 percent of people in the UK supported the measures of the government of David Cameron towards the territory known as The Rock.

These are the findings of a poll of Spaniards and Britons on their opinion towards the latest dispute between Spain and the United Kingdom over Gibraltar.

The tensions began in July after Gibraltar boats dumped blocks of concrete into the sea near the territory. Gibraltar said it was creating an artificial reef that would foster fish populations.

Spain said the reef would block its fishing boats and introduced stringent border checks which it said are needed to stop smuggling, creating long waits for motorists trying to enter the territory.

In their survey, the Real Instituto Elcano also asked Spaniards and Britons which political model they would prefer for Gibraltar.

A total of 48 percent of people in the UK said they favoured the current model, while that number was only 7 percent among Spaniards.

Some 9.3 percent of people in the UK said they would like to Spanish sovereignty for the territory: for Spanish respondents this number was 48.3 percent.

In terms of shared sovereignty, 16.7 percent of people polled in the UK gave the thumbs up to this option, while over on in four (27.6) of Spaniards were in favour.

Self-determination for Gibraltar was the number one choice for 25.7 percent of UK poll respondents and 17 percent of Spaniards polled were in favour of the model.

The Real Instituto Elcano survey also found that Spaniards rated the importance of the dispute at just 5.7 percent out of a possible top score of ten.

The country's economic crisis and the corruption both scored 9.1 out of ten.

The Real Instituto Elcano interviewed a representative sample of 1,000 people in Spain and the United Kingdom in late August to obtain its results.