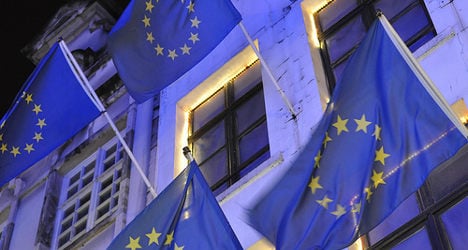 Catalan politicians in the European Parliament complained about an act honouring Spain's volunteer Blue Division which fought under Hitler. Photo: Matt May

"The flagrant and intentional exoneration, negation or trivialization of crimes" committed by totalitarian regimes "must result in legal punishment," the European Commission's Vice-President Viviane Reding said on Monday.

The parliamentary comments from the EU Vice-President, also the EU's Justice Commissioner, came after several Catalan parties denounced the participation of the representative of the Spain's central government in Catalonia, María de los Llanos de Luna, for honoring Spain's volunteer Blue Division which fought for Hitler in World War Two.

Llanos de Luna handed the group a certificate of thanks during a ceremony marking the 169th anniversary of Spain's Civil Guard Police Force, Catalonia's El Periódico newspaper reported on Monday.

Some thirty groups took part in the event, including members of the Blue Division.

But Llanos de Luna's participation caused outrage among many of Catalonia's political groups.

In an official response to comments on the issue from four Catalan Euro MPs, Reding said: "all member states of the EU are obliged to impose penal sanctions against deliberate public incitement, to violence and hatred against groups or people for reasons of their race, colour, religion, background or national or ethnic origin.

The Commissioner added that from 2014 would have the power to act against member states that did not impose such punishment.

The move came after several members of the PP's youth wing were photographed displaying the nationalist Spanish flag used during the rule of Spanish dictator Francisco Franco.

In other cases, Nazi salutes were performed.