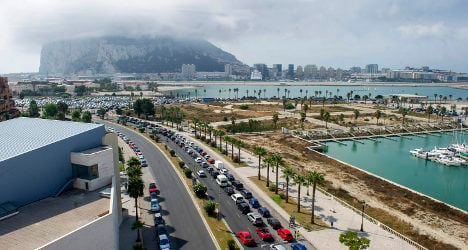 Cars line up in Spain to enter Gibraltar: the recent dispute between these neighbours has seen queues of several hours at the border. Photo: Marcos Moreno: AFP

The Royal Gibraltar Police had been handed "an official report" about the incident, the force said in a statement.

A "small number of missiles" were flung at  Guardia Civil officers on duty at the frontier," the statement continued.

Gibraltar police said the incident "allegedly" took place at "at the peak of extensive queues to exit Gibraltar which at their height reached four hours".

The missiles were thrown "from the area of the motorbike lane" after "insults and abusive comments were directed at the Guardia Civil," the Gibraltar police said in their statement.

Tensions on the border between Gibraltar and Spain have been high for several weeks after a dispute over the waters over Gibraltar.

The spat kicked off after Gibraltar began construction of an artificial concrete reef in the waters of the UK-held territory known popularly as The Rock — a move which Spanish fishermen said prevented access to their traditional fishing grounds.

Madrid responded by floating the idea of a €50 fee for crossing the border between Spain and Gibraltar.

There have also been long queues at the border, with Spanish police carrying out checks of vehicles coming in and out of the territory.

In late July motorists spent up to six hours in summer heat, waiting to cross the border.

"Spain has again shown that she cannot resolve issues through normal diplomatic channels. Instead she merely resorts to heavy-hand tactics at the frontier," said Gibraltar Deputy Chief Minister Joseph Garcia at the time.

One Spanish-language web page labelled the Civil Guard officers inspecting the guards as "torturers" and posted pictures of individual agents.

The site called on citizens of La Linea, the Spanish town neighbouring Gibraltar, to picket the homes of the officers.