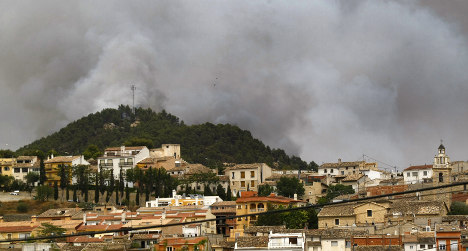 Smoke rises during a fire in the village of Barco de Valdeorras in Galicia in northwestern Spain, on August 11th. Photo: Imma Castilla/AFP

Emergency teams backed by water-dumping aircraft brought under control a fire that had raged for four days and ravaged 1,850 hectares (4,571 acres) near Oia, a village on Spain's Atlantic coast, the Galicia region government said in a statement.

Two smaller wildfires were still raging in two other parts of the region and had burnt a few hundred hectares between them, it said.

Across the nearby border in Portugal, more than 2,000 firefighters along with locals were battling forest fires that have claimed five lives this month and ravaged thousands of hectares of forest.

Spain and Portugal are highly prone to forest fires in summer because of soaring temperatures, strong winds and dry vegetation.

After a wetter winter than usual, however, there have been far fewer wildfires in Spain this year than last, according to government figures.