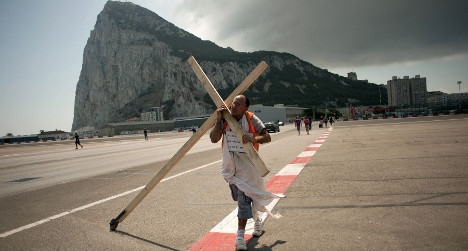 The last time Márquez attempted a similar march, he had to be rushed to hospital after emergency workers found him semiconscious in a ditch. Photo: Jorge Guerrero/AFP

Fifty-year-old Justo Márquez began his peace march on Thursday by walking the 30 kilometres that separate Malaga from the Andalusian town of Fuengirola.

"If anybody offers me a bed to sleep in or a meal I would be very grateful," the ill-prepared Márquez told Spanish news agency Europa Press as he set off with just a baguette and a bottle of water.

"Otherwise I’ll just have to crash on the beach, which isn't a problem for me."

This devout Catholic from the town of Nerja thinks there’s only one man capable of resolving the current spat between Spain and Gibraltar over territorial waters.

"Only God can put an end to this conflict," news website Noticias 21 reported.

He’s also posted several placards on his body with messages such as “No more hunger, no more war, peace on Earth”.

Márquez, who hopes other people he meets will join him on his march, will go on a hunger strike once he reaches Gibraltar.

While there, he also plans to pray in front of the fence that marks the border between Spain and the UK-held territory.

"I won't eat or drink for 24 hours so that God intervenes in the conflict," he explains.

"I’m not demanding The Rock becomes Spanish or British, I just want the dispute to end."

It’s not the first time Márquez has marched for justice.

In 2009, the former shop keeper walked 400km from Granada to Madrid so that a relative let him use the water from a pond they once shared.

He had to be rushed to hospital after emergency workers found him semiconscious in a ditch.