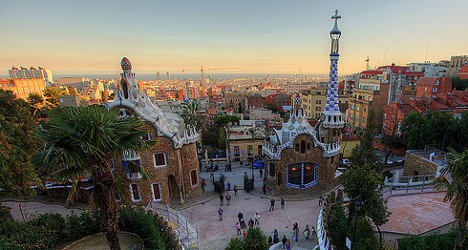 Receiving an average nine million visitors a year, Parc Güell is the last place in Barcelona where Gaudí's work is free to see. Photo: Gylo/Flickr

Catalonia’s government decision to introduce the entrance fee for foreign visitors from October 2013 has been criticized by some local groups and tour operators who think it breaches European laws.

Residents of the Parc Güell neighbourhood and Barcelona residents will be able to enter the monumental area free of charge, leading some critics to label the tourist fee as discriminatory on the basis of origin.

Catalan authorities are also set to limit the number of visitors to the Gaudí zone to 800 per hour, which locals fear will spur a tourist invasion to the other more tranquil areas they commonly frequent to escape the crowds.

"This is a municipal and not a museum or a cathedral. No one should have to pay," Dani Torrents of the group told the Local.

"There are other ways to raise money, including, for example, charging for the parking of private tourist buses," Torrents added.

Barcelona Town Hall have defended the move by claiming the ticket money will go to the park's maintenance and create up to fifty new jobs.

Receiving an average nine million visitors a year, Parc Güell is the last place in Barcelona where Gaudí's work is free to see.