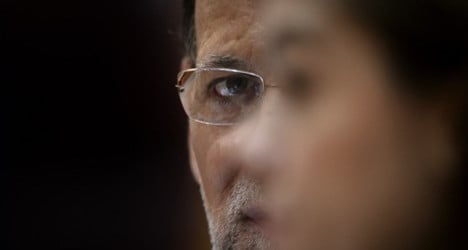 Spain’s Socialists were hoping the motion would kick-start a vote on whether Mariano Rajoy should be ousted from his post as Prime Minister. Photo: Dani Pozo/AFP

The governing PP, which holds a majority in the Spanish Parliament, has vetoed the Socialist Party's efforts to have Mariano Rajoy speak out in court on his alleged involvement in the so-called Bárcenas case.

Spain’s Socialists, the PSOE, were hoping the motion would kick-start a vote on whether Mariano Rajoy should be ousted from his post as Prime Minister.

But speaker of the House Jesús Posada deemed that the Popular Party’s claims that there were "no reasons of general interest" for Rajoy to testify were valid.

The Spanish Prime Minister was already grilled in Parliament after documents published in Spanish media showed he and other members of his conservative Popular Party had allegedly received under-the-table payments from Bárcenas.

According to an opinion poll by Spain’s Sigma Dos institute, Spaniards overwhelmingly believe Prime Minister Mariano Rajoy lied on August 1st when he denied taking any money after his name appeared in relation to the corruption scandal.