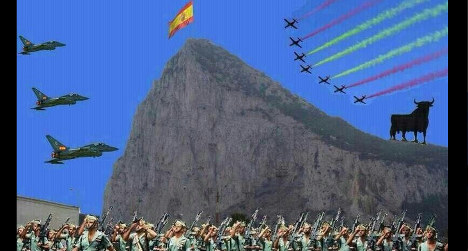 The picture shows soldiers from Spain’s nationalist Foreign Legion and the emblematic Osborne bull silhouetted in the background. Photo: Twitter

Francisco Javier Pérez Trigueros, the mayor of the Valencian municipality of Callosa de Segura, caused fury among the 30,000 inhabitants of Gibraltar after posting a mocked-up image of the Spanish invasion.

The picture shows fighter jets trailing red and yellow smoke over The Rock, soldiers from Spain’s nationalist Foreign Legion and the emblematic Osborne bull silhouetted in the background.

Trigueros's provocation comes amid continued tensions between Spain and the UK over Gibraltar.

It isn't the first time the right-wing mayor has chosen radical means to voice his political disapproval.

“Give these shits the bloody independence they’re after and put up a ten-metre wall so we don’t have to see them again,” Trigueros wrote on his Facebook page after there was booing of the Spanish national anthem at the World Aquatic Championships in Barcelona.

Check out The Local's list of Ten Things you didn't know about Gibraltar.

The administrator has recently posted “Clarification for English people: This page IS AGAINST THE MAYOR OF CALLOSA DE SEGURA (FRANCISCO JAVIER PÉREZ TRIGUEROS). We are aware that this man is a fascist and we want his resignation.”

The current spat between Spain and Gibraltar arose after the UK territory decided to drop cement blocks into the waters off The Rock to build an artificial reef.

Spanish fishermen claimed this blocked access to their traditional fishing grounds, while Madrid responded by suggesting it could impose a €50 ($67) charge on vehicles crossing the border between Gibraltar and Spain.