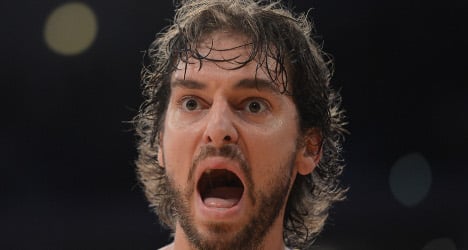 The 33-year-old Los Angeles Lakers center — silver medalist in 2008 and 2012 and the country's flagbearer at the latter opening ceremony — will act as spokesman for Spain's athletes at the final presentation to the 100+ International Olympic Committee (IOC) members in Buenos Aires on September 7th.

Madrid, third and second for the hosting of the 2012 and 2016 Games respectively, are up against Istanbul and Tokyo, the only one to have previously hosted the Games in 1964.

Read The Local's in-depth opinion piece on whether Madrid should host the Olympics.

"The Olympic Games are more than sport – I know this personally as an Olympian. Spanish sport and the people of Madrid need the boost the Olympic Games would provide, and Madrid is ready to face this challenge," said the Barcelona-born Gasol, who has won two NBA titles with the Lakers.

"But Madrid will also give something back to the Olympic Movement — we are a city that is prepared with a responsible bid plan that will help develop sport far into the future", he added.