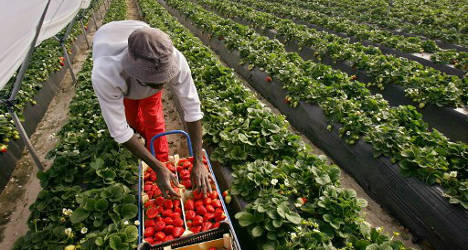 Spain has more than double the European average of non-EU workers with 8.3 percent compared to Europe’s 4 percent. Photo: Samuel Aranda/AFP

Spain has more than double the European average of non-EU workers with 8.3 percent compared to Europe's 4 percent.

Official data collected from Eurostat by international recruitment agency Adecco also highlights that Spain has the second highest percentage of workers from other EU member countries (4.4 percent) after the United Kingdom (4.8 percent).

That means that a total of 12.7 percent of Spain's workforce is not actually from the Iberian nation.

Spain's population declined in 2012 for the first time in 17 years and the departure of foreigners from the country was partly responsible.

There's been a 23 percent drop in the employment rate among foreign workers against a 15 percent fall among Spaniards since the financial crisis began.

But Spain still remains the EU member with the highest percentage of non-European workers, even though Germany with 2.1 million and Italy with 1.6 million have higher numbers.

The flow of immigration to the country has slowed since Spain entered into its worst recession in decades at the end of 2008 as the global credit crisis hastened a correction already underway in its key property sector.