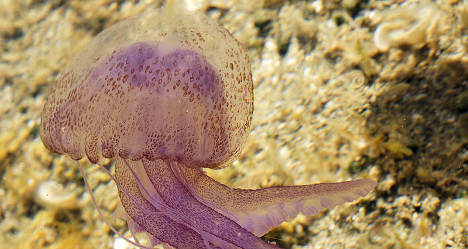 Safe to go back in the water? A sting from the Pelagia noctiluca jellyfish can cause burning, nausea and muscle cramps. Photo: Wikimedia Commons

Jellyfish numbers are up across the Mediterranean this summer, and while most of the animals are harmless, some can leave a nasty sting in the summer holiday tale.

An attack from a mauve stinger (Pelagia noctiluca), for example, can lead to a nasty case of burning, nausea and muscle cramps.

In total, around 150,000 people receive treatment after jellyfish stings on Mediterranean beaches each year, according to the US National Public Radio (NPR) network.

The number is also climbing: a recent flyover of Spain's coast by scientists revealed jellyfish blooms over a kilometre long.

"Overfishing is one reason. Because if we take out the fishes from the oceans, we leave more food in the environment, and jellyfish are very smart," the biologist from Italy's University of Salento told NPR.

"They can multiply very easily in a very short time — much faster than any vertebrae, any fish in the sea."

And climate change could also be a part of the problem.

"Many of the species we are observing have a faster growth rate with increased temperature," Piraino said.

"There are a number of alien species coming from the Red Sea, so tropical and subtropical species, that have entered the Mediterranean Sea from the Suez Canal."

The UK's tourism authority has also recognized the jellyfish threat to visitors to Spain's beaches.

"We have been alerted to large numbers of jellyfish in the Mediterranean this summer, especially in a number of key holiday destinations for UK tourists," the UK's Foreign and Commonwealth Office (FCO) said in a statement.

"We have updated our travel advice for a number of Mediterranean countries to reflect this issue."

The FCO recommends asking locals for advice before swimming.

Spain has also introduced jellyfish warnings on some beaches.