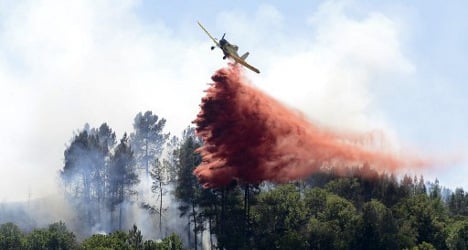 A firefighting aircraft dumps retardant on a fire in a Galicia northwestern Spain in 2012. File photo: Lorenzo Couto/AFP

The blaze, one of hundreds to ravage Spain's parched land over the summer, broke out late Monday near Oia, a village on the Atlantic coast near the border with Portugal.

Firefighters backed by aeroplanes and helicopters were battling to curb the flames which ravaged 1,000 hectares (2,470 acres) as they spread, the regional government said in a statement.

An alert was declared after the fire came close to some houses and residents were evacuated, an official in the Galicia region rural affairs ministry told AFP, but no one was reported hurt.

"The situation has improved since last night," the official said. "We are not aware of the fire reaching any houses, although there were some evacuations."

The official could not say how many people were evacuated but Spanish newspapers said the figure was at least 176.

The ministry said firefighters had controlled four other fires in the region in recent days, which burned thousands of hectares between them.

The central government said it had sent firefighting planes and personnel to the Oia fire and two others, in the Asturias region and the Tarragona area west of Barcelona.

Spain and Portugal are prone to forest fires in summer because of soaring temperatures, strong winds and dry vegetation.

Last year wildfires destroyed more than 150,000 hectares of land in Spain from January to July, after one of the driest winters on record.

One fire on the holiday island of Majorca this month burned 480 hectares and another there last month burned 2,335 hectares, much of it in the Sierra de Tramuntana, a UNESCO-listed mountainous region.