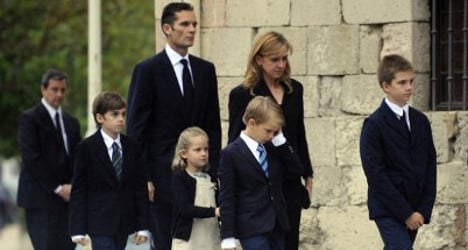 Infanta Cristina will be enrolling her four children in Geneva’s École International, which will cost €120,000 a year in tuition fees. Photo: Rafa Rivas/AFP

The youngest daughter of King Juan Carlos of Spain will relocate to Switzerland in the coming weeks following a corruption scandal involving her husband Iñaki Urdangarín.

Cristina, who will separate from Urdangarin for “professional reasons”, will coordinate the programmes run by Spain's charitable La Caixa Foundation in conjunction with various United Nations agencies based in the lakeside city.

But the bid to take the pressure and the limelight off the royal has backfired after Spanish daily El Mundo revealed how much Cristina will receive for her new life in Switzerland.

The princess, or Infanta as she is known in Spain, will be enrolling her four children in Geneva’s École International, which regularly ranks in the top 20 schools in the world.

The new Urdangarin family home doesn’t come cheap either: the 200 square metre property will cost at least €5,000 a month to rent.

Then there’s the princess’s salary, which will be bumped up to €320,000 a year as a result of the move abroad.

Private security costs will also cost €300,000 annually to be paid by the Spanish taxpayer, without including the relocation and housing of the bodyguards.

Cristina and her husband and Urdangarin have been under immense pressure because of a long-running corruption scandal involving a charitable sports foundation.

The pair are suspected of overbilling regional governments to stage sports and tourism events, and then diverting money to the non-profit Nóos Institute, which Urdangarin chaired from 2004 to 2006.

In April, Cristina was summoned to appear in court to answer questions about her husband's business dealing.

The court summons — the first for a member of Spain's royal family — was later appealed.

In early May judges spared her for the time being from being called into court to be questioned as a formal suspect.