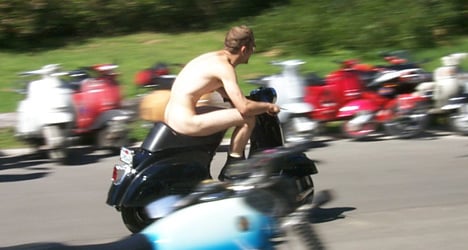 Astonished officers were confronted by a sight similar to this after responding to reports of a nude motorcyclist. File Photo: Flickr/El Caganer

Two Civil Guard traffic units in Utrera, Seville, responded to a number of reports early on Sunday morning of a nude man riding a scooter in an unsteady manner on the local A-375 road.

They found him heading for the town of El Coronil where a local holiday was being celebrated.

The rider ignored the officers' order to stop and fled 'in a reckless manner', mounting pavements and endangering pedestrians, according to Spanish daily 20 Minutos.

A police statement revealed that after a prolonged 'high-speed' chase the man abandoned his vehicle and plunged into a field of sunflowers, where he was arrested.

The man was found to be drunk and badly scratched by the vegetation.

He has been charged with reckless driving and driving under the influence of alcohol.