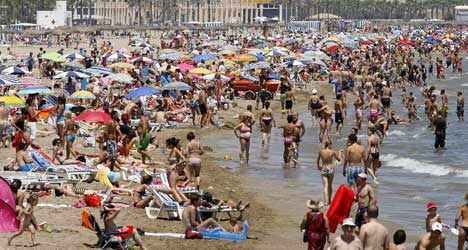 Catalonia and the Balearis Islands are Spain's most popular destinations with foreigners. Photo: DIEGO TUSON/AFP

Information collected by the Spanish Inbound Tourist Survey (FRONTUR) and released on Thursday by the Ministry of Industry, Energy and Tourism indicated a 2.9% rise compared with the same month last year.

A new influx of visitors from the Nordic countries, Britain and Russia was said to have contributed to the rise in numbers.

In the first six months of this year, more than 34 million international tourists arrived in Spain, 3.9% more than in the same period in 2012.

Visitor numbers from the United Kingdom, still the biggest market for Spanish tourism, experienced an upturn of 4.3% over this period this year while those from Germany, the second-biggest market, rose by 2.5%.

The autonomous region of Catalonia, with a rise of 5.1%, was the biggest beneficiary of this wave of new tourists, according to daily El Confidential.

The Balearic Islands also increased in popularity with tourists, rising 7.5% and netting 18.4% of total arrivals.

FRONTUR has not given any explanation for the increase but it came in a period when rival markets in Egypt and Turkey faced political unrest.