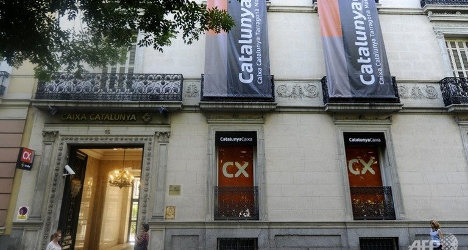 Catalunya Banc was formed in 2010 from the fusion of three savings banks in the Catalonia region. Photo: Pierre-Philippe Marcou/AFP

Last year, the eurozone agreed to finance a rescue of Spain's banks, swamped in bad loans since a property bubble imploded in 2008 plunging the country into a double-dip recession.
Spain, the eurozone's fourth-largest economy, has so far withdrawn 41 billion euros ($55 billion) from the rescue loan to restructure banks including Catalunya Banc.

A union representative in the company who asked not to be named told AFP the bank had drawn up a restructuring plan under which 2,453 of its 7,200 workers will be laid off and 450 of its 1,200 branches shut down.

"It is a really brutal move that demonstrates a lack of will to negotiate," the source added, warning that workers would protest against the move next month after the summer holidays.

The bank's management declined to comment on the cuts but said it was negotiating with unions.

Catalunya Banc was formed in 2010 from the fusion of three savings banks in the Catalonia region in an earlier phase of the financial sector shake-up prompted by the crisis.

It is the second-biggest of the four banks that have been nationalised by the Spanish government to save them from collapse.