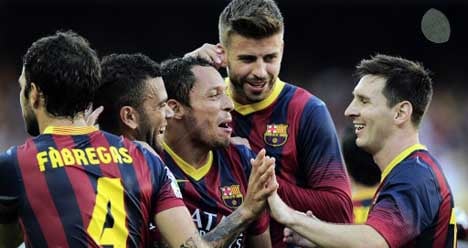 There was even more for the home fans to cheer after the break as Neymar made his competitive debut as a substitute and even after Martino had shown the visitors some mercy by withdrawing Messi with 20 minutes remaining, more woeful defending allowed Pedro to round off the scoring with his second of the game.

"I was anxious for the league to start to see where the team were and I have been left very calm," said Martino.

"We put a lot of emphasis on pressing and we managed to sustain it for the majority of the match."

It took Barca barely two minutes to register their first goal of the campaign as Sanchez finished off a fine team move before Messi opened his account for the season with a side-footed finish from close range.

Alves tapped home the third on 23 minutes before further strikes from Pedro, Messi from the penalty spot and Xavi made it six before half-time.

The Catalans weren't quite as clinical after the break, but the moment many inside the crowd had been waiting for arrived on 62 minutes as Neymar made his competitive bow in a Barca shirt in place of the impressive Sanchez.

The Brazilian's only moment of note was when he picked up an unnecessary yellow card, but Barca did manage one more goal before the end as Pedro side-footed home his second of the night.

It was a far more complicated evening for Real however as they needed a headed winner from debutant Isco four minutes from time to take all three points against a spirited Betis.

"I am very happy, above all for the victory," Isco told Canal Plus afterwards.

"It is the first goal that I have scored with my head.

"The truth is that Betis surprised us a bit but it is the first game of the league, we have to improve a lot but we have just started."

Jorge Molina gave the visitors the lead their bright opening deserved on 14 minutes as Cedric Mabwati burst past Sergio Ramos and laid the ball across the area for Molina to slot home.

Slowly but surely Madrid started to find their feet though and they were level midway through the first-half when Karim Benzema swept home from Isco's pass.

Both sides then struck the bar either side of half-time as Nosa headed against the woodwork for Betis before Cristiano Ronaldo came within inches of marking his 200th appearance for Madrid in style as his shot from the edge of the area came back off the bar.

Nosa had another fantastic opportunity to put Betis back in front as he headed over when completely unmarked just 10 yards out 19 minutes from time.

And Betis were made to pay for their profligacy in front of goal as with the clock winding down, Isco made a fine late run into the area to meet Marcelo's cross and plant a header high past Stephan Andersen.

Atletico Madrid, who face Barca on Wednesday in the first-leg of the Spanish Super Cup, also began their campaign with a 3-1 victory away to Sevilla thanks to a double from Diego Costa.

The Brazilian – who signed a three-year extension to his contract last week – opened the scoring 10 minutes before half-time only for Diego Perotti's wonderful strike from 25 yards to level matters two minutes later.

However, Costa was to have the final word as he strode onto Koke's pass to finish low past Beto in the Sevilla goal 11 minutes from time before Cristian Rodriguez added a third in stoppage time.

And Granada got some early recompense for the money they have invested in the transfer market as goals from Youssef El Arabi and Hassan Yebda handed them a 2-1 win over Osasuna.