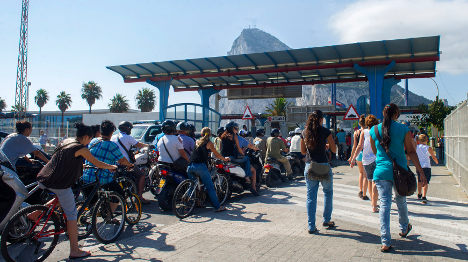 In Brussels, the Commission, or EU executive, confirmed the telephone call but underlined that the quarrel between Britain and Spain would best be sorted between the two European Union nations.

A row has broken out between London and Madrid over the British outpost after Spain introduced stringent border checks which have led to waits of up to five hours for motorists trying to enter the British-held territory.

Gibraltar has accused Madrid of imposing the checks in retaliation for its decision to drop concrete blocks into the sea to create a reef for fish at the mouth of the Mediterranean.

A Downing Street spokesman said that in his call Cameron complained that the border checks are "politically motivated and disproportionate" and called for the European Commission to send a monitoring team to the border "urgently" to collate evidence.

The EU has said it will send observers to Gibraltar in September, but Cameron said they should be sent now.

A statement issued in Brussels said that "President Barroso explained that the Commission is continuously monitoring the situation and will do what is in its competence to ensure respect of EU law."

It added: "President Barroso also expects that this matter is addressed between the two countries concerned in a way that is in line with their common membership in the EU."

The Downing Street spokesman said Cameron called Barroso "to raise serious concerns that additional border checks introduced by the Spanish at the Spain-Gibraltar border are politically motivated and disproportionate, and therefore contrary to the EU right of free movement.

"The PM made clear that we would prefer to resolve this issue through political dialogue. Consequently, both the PM and the Foreign Secretary (William Hague) had called their Spanish counterparts to try to find a way to de-escalate the issue."

Cameron told Barroso that Britain had also proposed "ad-hoc talks" involving the government of Gibraltar to find a solution. Britain had announced on Monday that it was considering legal action against Spain over the border checks.

The British government is now "collating evidence on the sporadic nature of these measures which would prove that they are illegitimate," Cameron's spokesman said.

"We believe that the European Commission, as guardian of the treaties, should investigate the issue and the PM called on President Barroso to send an EU monitoring team to the Gibraltar-Spain border urgently to gather evidence of the checks that are being carried out," he added.

A British naval frigate is due to dock in Gibraltar on Monday before taking part in a naval exercise in the Mediterranean which London insists was planned long before the latest row broke out.