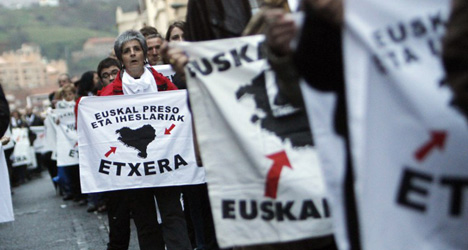 Demonstrations demanding the transfer of ETA prisoners to the Basque country reflect the discord between negotiators and the Spanish government. Photo: RAFA RIVAS/AFP

The article contrasts the British government's willingness to negotiate with the Irish Republican Army with Madrid's unconciliatory attitude towards the Basque group.

Noting that, "A much-weakened ETA has done a lot to wean itself off violence. It has not killed in Spain for four years," it goes on to emphasize that those who called the October 2011 ceasefire remain in control.

But the Economist points out that "ETA still has arms and explosives."

It adds: "A heated debate continues between ETA’s leadership, its 700-odd jailed members and its political allies over whether to give up the weapons."

Spain's ruling Popular Party has a "highly vocal 'victory or nothing' lobby" which is causing conflict with ETA's negotiators who want to broker deals for ETA prisoners, according to the editorial.

The Basque country's ruling moderate Basque National Party Prime Minister is said in the article to be "furious that the PP government has failed to ease ETA’s journey to disarmament."

Non-violent separatist group Sortu and its electoral arm EH Bildu came second to the nationalists in the regional elections last year, putting Basque separatism back on the political agenda.

But as the editorial says, "EH Bildu’s incursion into everyday politics forces it to confront such mundane issues as rubbish collection and planning laws, which affect Basques’ everyday lives, rather than dreaming of independence."

It concludes: "That engagement can only be good. But with ETA in the wings, politics can never become normal. Everybody should want it to leave the stage completely."