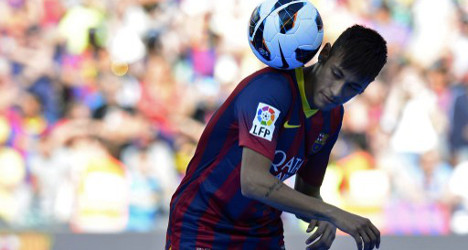 Neymar has dominated attention after his €57 million($74 million, £48.7 million) move from Santos to Barcelona was confirmed in June. Photo: Lluis Gene/AFP

Looking at the Spanish sports pages over the typically baking summer months, it would appear the Spanish game was in rude health both on and off the pitch.

In Catalonia, Neymar has dominated attention after his €57 million($74 million, £48.7 million) move from Santos to Barcelona was confirmed in June, whilst, in the capital, Real Madrid backed up their €69 million investment in the young Spanish duo of Isco and Asier Illarramendi with an on-going pursuit of the €100 million rated Gareth Bale in a saga that looks set to run well into the final days of the transfer window.

But beneath the big two, the game in Spain has continued to reflect the general ailing Spanish economy with even clubs in the Champions League forced to sell their best players.

As a result, the already colossal gap between Real and Barça and the rest continues to increase as do fears that by continuing to use an unbalanced TV deal that greatly favours the big two, La Liga descends further into a turgid two-horse race.

However, whilst both Barça and Real have been active in the transfer market, there are concerns that both have so far failed to bring in the type of players they really needed after falling at the semi-final stage of the Champions League last season.

Neymar's arrival should certainly ease the scoring burden that Lionel Messi has carried almost single-handedly for the past two seasons, but the Catalans still look very threadbare at the back with captain Carles Puyol having undergone two operations during the close season and not due back till at least September.

There is though already a great deal more calm around Los Blancos following the departure of Jose Mourinho with the management team of Carlo Ancelotti and Zinedine Zidane highly-respected by the squad and the players themselves coming together as a unit following the public clashes and fallouts that marked the Portuguese's final season at the Bernabeu.

That greater unity should mean Real push Barca a great deal closer than they did last season, but the title will again be defined by small margins.

Such is their dominance that firstly Real and then Barca amassed 100 points in winning the title in the past two seasons and with the gap only set to widen between them and the rest, it is highly likely whoever becomes champions will need to register a century of points once more.

Atletico have arguably done the best business in terms of value for money as they replaced the €60 million Colombian with David Villa for an inital fee of just €2.1 million.

Continuing an uncharacteristic period of stability since Diego Simeone took charge of the club in December 2011, Atletico are only the only club to finish in the top six last season that haven't changed manager over the close season and they are heavy favourites to be the best of the rest once more.

Further down, Valencia, Sevilla, Real Betis and Real Sociedad are all likely to be in the mix for the European places despite all losing key players in recent months.

Valencia have replaced new Spurs signing Roberto Soldado with a former Spurs player, Helder Postiga, for a tenth of the price they sold Soldado, whilst Sevilla have also seen two Spanish internationals depart as Jesus Navas and Alvaro Negredo have joined Manchester City.

However, they will still most likely battle it out for the final Champions League place as last season's surprise package Sociedad haven't invested heavily in their squad despite the 39 million euro windfall they received from Illarramendi's departure.

Betis have lost their key creative lynchpin in Benat Extebarria after he rejoined Athletic Bilbao and the Basques themselves will be hoping for a far more successful campaign than their 12th-placed finish last season following the appointment of the highly-rated Ernesto Valverde as manager.