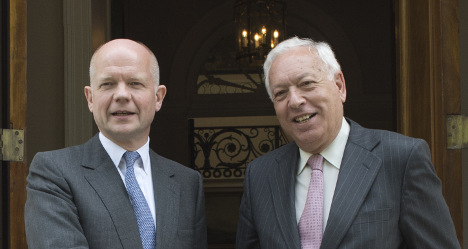 The mooted charge is the latest salvo in a tit-for-tat dispute with Gibraltar, but Spanish Foreign Minister Jose Manuel Garcia-Margallo played down fears the border fee could affect the thousands of people who cross the 1.2 kilometre frontier every day.

"This tax would not in any way affect those workers, regardless of their nationality, who go to work in Gibraltar or those from Gibraltar who come to Spain," he was quoted as saying on Spanish public television.

He said the border fees would serve to offset the losses suffered by Spanish fishermen because of Gibraltar's controversial concrete reef, which the tiny territory says is aimed at stopping alleged incursions by Spanish fishing boats.

Read The Local's opinion piece on why Gibraltar should be Spanish.

The fishing dispute has escalated into a wider row, with Gibraltar accusing Madrid of introducing increased border checks in retaliation for the reef.

The Spanish argue that the checks — which have caused tailbacks of several hours — are necessary to combat smuggling, and that the reef is a deliberate impediment to Spanish fishing vessels in a dispute over territorial waters.

Spanish Prime Minister Mariano Rajoy on Friday said his country would take "all necessary measures" to defend its interests in Gibraltar, just days after his British counterpart David Cameron warned that bilateral relations could be damaged by the border row.

Spain ceded Gibraltar to Britain in perpetuity in 1713 but has long argued that it should be returned to Spanish sovereignty. London says it will not do so against the wishes of Gibraltarians — who are staunchly pro-British.

The self-governing British overseas territory, measuring just 6.8 square kilometres (2.6 square miles), is home to about 30,000 people, and is strategically important as it overlooks the only entrance to the Mediterranean Sea from the Atlantic Ocean.

While Garcia-Margallo called for dialogue on fishing rights, he also lashed out at Spain's previous Socialist government for making too many concessions
to Gibraltar.

"We let them manage the airport almost unilaterally, we allowed them to expand their sea territory, we let them use the airspace without restrictions," he said.