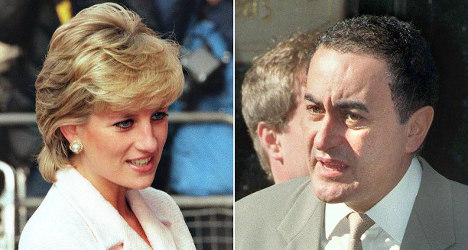 Diana, Princess of Wales, and Dodi Al-Fayed: the two were killed in a car accident in 1997. Photo: AFP

Al-Fayed originally offered the reward in 1998 in exchange for proof that his son Dodi Al-Fayed and of Diana, Princess of Wales had not been killed in an accident.

Now the Andalusian Carretero is hoping to get his hands on this sum, although he says he is more interested in uncovering the truth than the money which is up for grabs.

The engineer's version of the events of August 31st 1997 — the night Princess Diana died — differs from official accounts.

Without outlining all the details to the press, Carretero said the explanation lay in the difference between two different versions of the event.

However, on November 18th "they said it was going at 90kph" and didn't brake".

He says the real story of the night Princess Diana died has been covered up by a complex smoke screen orchestrated by a gang of criminals, Spain's ABC newspaper reported on Friday.

Carretero's explanation comes in the form of a 2,000 page-study. And now the engineer wants action from Mohamed Al-Fayed.

"If he doesn't want to help me to solve the death of his son, he should pay the amount at current rates, and if he does me to help him, we can leave the money issue aside until later".

"The world needs to know what really happened," said Carretero.

The engineer claims Al-Fayed already has an illegal copy of his lengthy study for which he is also making a copyright claim.

He also says he has been receiving anonymous threats about the case.

"It there are any mistakes in your report, we are going to sue you for false claims," Carretero says he has been told.

A 2008 UK inquest into their deaths found that their deaths were the result of negligent driving by chauffeur Henri Paul.

But Mohamed Al-Fayed refused to accept this verdict, instead offering up the $20 million reward for information about the real cause of his son's death.

Carretero has previously investigated the death of US President John F. Kennedy, although he carried out that research for his own pleasure.