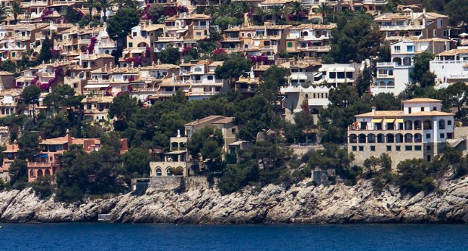 Calvià is one of two Majorcan municipalities which made it onto Greenpeace's list of ten most overbuilt coastlines in Spain. Photo: Greenpeace

"The new law worries us enormously. It is returning us to the 1960s in terms of environmental protection. We are taking giant steps backwards," Pilar Marcos, a Greenpeace representative in charge of coastal issues in Spain, told a news conference.

A new coastal development law approved by parliament in May reduces the area where construction is completely banned from 100 metres (330 feet) to 20 metres from the coastline and extends leases of built-up coastal land.

Greenpeace plans to submit a petition against the new law which so far has nearly 150,000 signatures to the European Union in October. The environmental group argues the new law violates nine EU directives.

"Almost half of Spain's Mediterranean coast has already been urbanized and we can't allow the 50 percent that remains to be swallowed up by bricks," said Marcos.

The amount of land within 500 metres of Spain's sunny Mediterranean coast which is built up jumped by 24 percent between 1987 and 2005 to 32,868 hectares as former fishing villages were swallowed up by tourist developments, Greenpeace said in a report presented Thursday.

That amounts to 43 percent of the total amount of land located within 500 metres of the country's Mediterranean coastline, according to the report which was based on satellite images of the coast.

"We have literally swallowed up the Spanish coastline," said Marcos.

The report predicted that Spain's Mediterranean coastline could be "completely built up" in 124 years if current trends continue.

While a property boom came to an abrupt halt in 2008 due to the global credit crisis, Greenpeace said national and European demand for homes on Spain's southern coastline is expected to pick up and the new coastal development law will make it easier for cash-strapped local governments to push through fresh construction projects.

"With the excuse of the economic downturn, there is a risk that any construction project could be approved with more lax or inexistant controls," said Marcos.